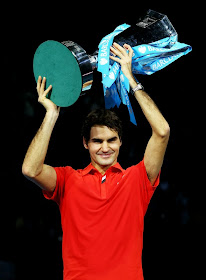 Roger Federer looked invincible all week in London. But somehow it doesn't ever seem to be enough against Rafael Nadal in the last couple years, so it was a bit of a relief to see him continue his dominance after dropping the second set to the Spaniard in London, taking his fifth season-ending title, 6-3, 3-6, 6-1. A lot of analysts are making a big deal out of this victory, but truthfully I am not. While it was a big deal in the sense that a loss for Roger would have been completing demoralizing for the aging legend, the loss for Rafa -- who has proven he no longer loses in Grand Slam finals -- means very little. Sure, it's a huge boost for Fed, who was probably beginning to wonder if he was even capable of beating Nadal at all. But Rafa still ends the year way ahead of the pack -- with the last three Grand Slam titles and a No. 1 ranking that is leaps and bounds ahead of the No. 2 spot. And although triumphant, Roger goes into 2011 having to defend his points from the Australian Open, played on the surface where Nadal brought him to tears when they played in the final in '09. The fact that Roger has only been able to beat in Rafa in best-of-three matches is also very telling, and speaks volumes about his prospects of winning another Grand Slam title that Rafa is healthy in. History has shown that a surprise win at the season-ending title rarely guarantees it's a harbinger of things to come. Just ask Nikolay Davydenko, Novak Djokovic, David Nalbandian or Alex Corretja. 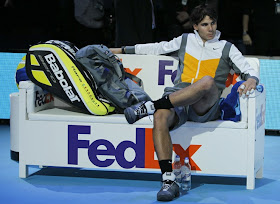