HE'LL GET BACK TO YOU Back in July, Gov. Ducey said he changed his White House ringtone to "Hail to The Chief" so he wouldn't miss a call from Trump/Pence. Guess who called while Ducey was certifying Arizona's election? (7 secs in) pic.twitter.com/bzBGpfSIDf

“Not Wanted: Ivanka Trump” signs are up in New York pic.twitter.com/74Ft4vkePc

Arizona Certifies Biden’s Victory, and Wisconsin Is Expected to Certify Within Hours https://t.co/JjvnUWiQv8

And just like that, my home state of Michizona is now blue

Gonna go crazy on this

Republicans never miss an opportunity to be horrible

The Supreme Court seemed skeptical of Trump's claim he has the authority to exclude all undocumented immigrants from population totals when deciding congressional reapportionment.https://t.co/rwYew4HqJ0

As with the Affordable Care Act, I will believe it when I see the ruling

I’m so sick of the media still hanging on every nutty word Trump says. He is the political version of the crazy man on the corner ranting about aliens. Stop giving him an audience when he really needs a psych consultation

Indeed. But that doesn't mean bloggers can't gloat for a little while longer, does it?

Reminder: In 51 days we get our country back. 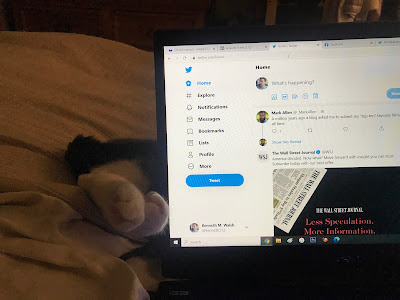