Song of the Day: 'Get Off the Phone' by the Heartbreakers 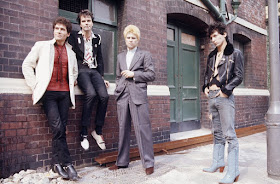 This one's in memory of Walter Lure, who was the last surviving member of the Heartbreakers. Lure, the pioneering punk band’s rhythm guitarist "who had a most unpunk second career on Wall Street," died on Aug. 21 at in Queens. He was 71 and had been battling liver cancer. (Bassist Billy Rath died in 2014, drummer Jerry Nolan died in 1992 and singer/guitarist Johnny Thunders died in 1991.)

The New York Times notes that the Heartbreakers were only together for a brief three years and recorded just one studio album, “L.A.M.F.,” released in 1977 on the British label Track Records. But among the bands that clustered around downtown clubs like Max’s Kansas City and CBGB during the early punk years, the Heartbreakers had an outsize reputation.

“They were probably the best band besides the Ramones and the Dictators,” Legs McNeil, a co-founder of Punk magazine and the co-author of “Please Kill Me: The Uncensored Oral History of Punk” (1996), said in a phone interview. “But they’re kind of like mythical, you know, because no one ever saw them. And when they did, Johnny was usually too drugged out to perform.”

I, of course, thought Blondie and Television were the best of that lot. But despite its reputation for being poorly produced, "L.A.M.F." definitely has its moments. RIP.