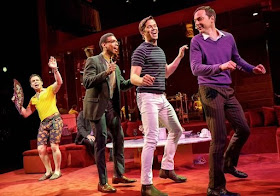 Scroll through these photos (at the bottom) for a look at the big party last night for the Broadway premiere of "Boys in the Band." I was lucky enough to see a preview performance last weekend and can't say enough about it. People frequently dismiss the play -- about a group of gay friends gathering for a birthday -- as being "too depressing" and "too negative" for portraying guys who are often self-loathing and bitchy to one another. But while I understand these concerns -- back when you only had one or two high-profile projects representing your "community" and it's not particularly flattering, it's easy to be defensive -- I've always appreciated and respected writer Mart Crowley's honesty and transparency shown with these characters. No, they don't -- and didn't in 1968 -- represent all gay men. But I can't help but think these ladies doth protest too much because they see themselves and their friends in these depictions. (I think less is more with reviews. But if you like to know more details about the plot, there's a more elaborate review HERE.) 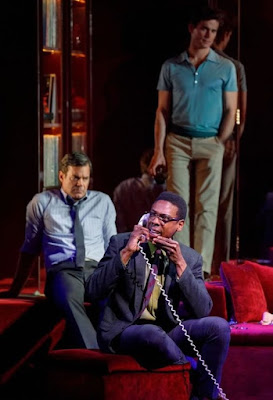 In fact, I was almost embarrassed to admit how much of the play still resonates with the gay community I know today -- especially couples navigating monogamy and single guys being honest with themselves about why they're single. My only quibble would be that the beautiful set of Michael's apartment looked a lot more like Liza's pad circa 1977 -- I could have sworn I saw Halston lurking in the background near the chrome and glass bar -- than 1968, and the styling of the men didn't exactly scream late '60s, either. (Andrew Rannells, who is hilarious but was essentially playing Elijah from "Girls," was dressed in white jeans that made him look straight out the mid-'90s.) But then I asked myself: Was obfuscating the era an intentional decision to bolster the (for better or worse) evergreen nature of the material? Methinks maybe yes. 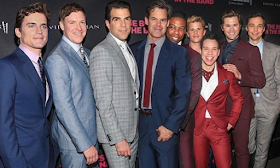 Afterward, my friend Tim and I each wrote down the man we most wanted to f**k in the cast. We both picked Tuc Watkins, who is a standout as the bisexual-ish Hank.

Look 👏 at 👏 these 👏 BOYS 👏 A big thank you to @davidyurmanmen and #CityNationalBank for making tonight's party a success. #BoysintheBand
A post shared by The Boys In The Band (@boysbandbway) on May 30, 2018 at 8:48pm PDT