Dylan Farrow Says Her Molestation Allegations Against Woody Allen Are 'Credible,' but Are They? 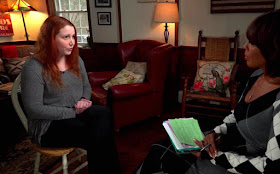 For years people have been speculating about the child molestation allegations against Woody Allen, and for many it's just assumed that they're true. Conflating having a sexual relationship with an adult woman (who we all know was Allen's girlfriend's daughter) with molesting a 7-year-old girl has been the Farrows' modus operandi from the day Mia Farrow discovered the betrayal. While they've been largely successful in muddying the waters, getting to the truth about what happened to Dylan Farrow has been largely brushed aside in favor of this all-purpose boogeyman scenario. To me the question about Dylan was never "Was she abused?" The question to me has always been abused by which parent? Now in her first-ever television interview, Dylan Farrow says she’s been “telling the truth” about the alleged sexual abuse she claims to have suffered at the hands of the director when she was just 7 years old. “I think it's important that people realize that one victim, one accuser, matters.” Dylan, now 32, tells CBS host Gayle King in an interview set to air Thursday morning. “I am credible."

But here's the problem: she's not. 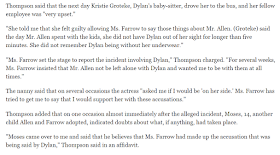 Even as a 14-year-old boy, Moses Farrow -- who was much older and in a clearer position to understand what was going on in the household -- and a nanny (ditto) voiced concerns that Mia was behind the allegations / Read HERE.

Having witnessed something like this first-hand in my own family, I have nothing but empathy for Dylan Farrow. And as a Mommy's Boy, I have even more. (As a 5-year-old, I tried to pull my drunk father off my mom and was thrown through a wall in return, so I understand being willing to do anything to protect Mom.) Ironically, I'm heartened that her claims are getting new traction through the #MeToo and #TimesUp lens in a macro sense, because society is finally getting it that you SHOULD generally believe people who say they were abused. But as I've said before, each case needs to be evaluated on its own merits, and every shred of evidence suggests that Woody Allen did not molest Dylan Farrow. But because society -- and particularly younger do-gooders -- feels guilty and is overcompensating for having not listened in the past, no one is paying attention to the actual evidence here. They're so busy being "woke" they're actually asleep. 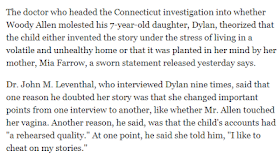 Millennials' hearts are in the right place. But I was a 25-year-old newspaper editor when this all started to come to light at the end of 1992 and 1993, so I've been following this case in real-time -- via newswires, Lexis-Nexis and my own paper's reporters -- before many of these supporters were even born.

What's most distressing is that I have no doubt Dylan Farrow believes she was molested -- so if Allen didn't do it, there's only one possible explanation for how this could be: Her mother, Mia Farrow, has been psychologically abusing her since she was 7.

If you are not familiar with the details, do yourself a favor and read the contemporaneous New York Times (and one key L.A. Times) stories I have screencapped throughout this blog post. Then read Robert Weide's essay "The Woody Allen Allegations: Not So Fast" over at the Daily Beast. (Various people have written "rebuttals" to the piece, but they all failed to show anything he actually got wrong.) Weide has continued to respond to -- and include links to -- all of the various reports from the Farrows HERE.

None of us can know for sure what the truth is. (Hell, none of us can say with 100% certainty that one of our own parents didn't molest us in our crib, either.) But there is such a thing as due process. And while the court of public opinion operates by its own set of rules (in that there are none), I am confident that anyone with any critical-thinking skills who goes through the available materials will come to the conclusion that these allegations are false.

For those who don't have time to go into an internet rabbit hole, I'll keep it brief. 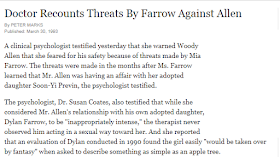 That Woody Allen -- who was on the world's shit list and being watched like a hawk in the Farrow home after it was revealed that he was dating Mia's daughter Soon-Yi Previn -- would decide to show up at Mia's Connecticut house one day to visit their children (Moses and Dylan, both adopted, and Mia and Woody's biological son, Ronan -- né Satchel) and suddenly decide to molest Dylan for the one and only time in his life?

Or that Mia -- who had just been jilted in arguably the most public and humiliating breakup in the history of Hollywood -- would follow through on the angry threat Woody says she made after the Soon-Yi revelations by saying "You took my daughter, now I'm gonna take yours." Remember this: Mia had not just been cheated on and dumped by her longtime companion. She was also "losing" her daughter as a direct result, losing her source of income and losing the professional esteem that came from being the star of a world-renowned director's films. Once considered the most envied woman in the world, Mia Farrow was without question the most-pitied woman in 1992. (Who's to say what ANY of us would be capable of doing having just lost our partner, our daughter and our career in one fell swoop?) 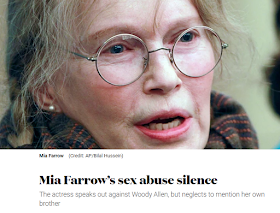 And don't forget, Mia was born into a prominent Hollywood family and ascended to being Tinseltown's '60s "It" girl. (Mia's brother John is in prison for molesting two young boys -- he says they're liars and his wife calls them "vipers" -- something self-styled victims' rights advocates Mia and Dylan have been curiously quiet about.) From TV star on "Peyton Place" to international movie star in "Rosemary's Baby" -- with designers making dresses for her, Vidal Sassoon giving her a celebrated haircut and men clamoring to date her -- there was nothing she couldn't have. When Mia met world-famous conductor Andre Previn, she had to have him -- even though he was married. Next thing you know, Previn impregnated Farrow with twins, and he left his wife (Dory) to be with her, while Dory was locked away in a sanitarium having shock treatment after suffering a nervous breakdown upon learning of the affair. Mia also married a really famous man 30 years her senior (some guy called Frank Sinatra). But now she's 47, and everything she's angry at Soon-Yi for she's already been guilty of. It was Mia's ultimate comeuppance -- her turn to "Beware of Young Girls" -- as she was now the humiliated older woman left behind. In these types of cases -- where an abuse allegation only comes forward after a nasty breakup -- you always have to look at motive. One minute she's leading the glamorous life with Old Blue Eyes on speed-dial, the next she's been dumped for the little girl she rescued from eating out of trash cans on the streets of Seoul -- has there ever been a stronger motive than this?

Add in the fact that someone who was in the house at the time of the alleged molestation, Mia and Woody's son Moses, says his dad was never alone with Dylan, that the attic in which the incident allegedly occurred was not inhabitable (and that the miniature toy train Dylan says she "watched" during the assault didn't exist) and that Mia coached Dylan to lie about the assault, and it's pretty compelling evidence that Mia is behind this whole thing. And did I mention that Mia’s lawyer told Woody’s legal team that the molestation allegations might magically “go away” if he paid her $7 million, and that two separate investigations found there was no credibility to Mia's accusations? #MeToo supporters don't seem interested in knowing about any of this -- they're too busy patting themselves on the back for telling Dylan they "believe" her. (Again, believing people who say they have been abused is good, but blind acceptance is not.)

As uncomfortable as it is to say this, it's probably just as well that Dylan Farrow believes her father molested her once, because she has shown she can live through "that" and without him. But I don't know how she would ever get over the realization that her mother likely was the architect of this victim prison she seems destined to live in the rest of her life. Perhaps it's time for Ronan Farrow, who has been charged with making documentaries for HBO, to probe his brother Moses's claims that Mia abused him. Or to investigate why three of Mia’s children are dead -- two by suicide-- and two are permanently estranged. Again, none of us can say for sure what happened. But it seems pretty clear to me (and to most people who are still able to look at the evidence objectively) that Mia’s life of privilege ill-prepared her to be so cruelly and publicly betrayed, and she reacted vengefully and recklessly to the detriment of her family -- Dylan, above all. 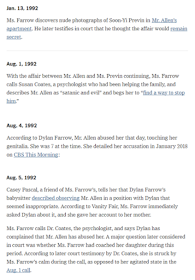 P.S. To anyone who still thinks Woody Allen is guilty of molesting Dylan Farrow, please read this newly compiled timeline by the New York Times. (Mia Farrow hysterically and understandably begged a psychologist to figure out a way to make Woody Allen stop seeing her daughter Soon-Yi Previn -- and then a chance to get him thrown in prison just happened to fall into her lap 72 hours later?!) If this doesn't give you pause, God help anyone who has you on their jury in a court of law. Yes, Woody's "running off" with Mia's daughter was vile and disgusting. But it's not the same thing as molesting a small child. 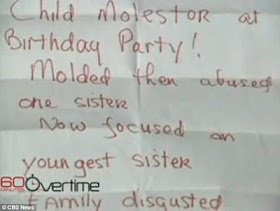 Personal note: For those who might be saying "Why do you care so much about this?" I'll say this. Yes, I grew up a huge Woody Allen fan. But I too think Allen taking up with Soon-Yi Previn was beyond unseemly. But having a consensual relationship with an adult and molesting a 7-year-old are two entirely different things, and it's always bothered me that the Farrows got a pass on conflating the two, something they have sought to do from the get-go. I know Allen is a multimillionaire who will be fine pretty much no matter what is said about him in the media, so there might be better causes for me to take up. But I don't have to agree with someone's entire life to be disturbed by what I see as unjust treatment. And as I said in the beginning, a similar -- albeit less rich and less famous -- scenario played out in my family, so perhaps that is why this case spoke to me as it has. 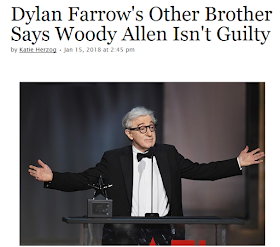 
I reached out to Robert Weide, an Oscar-winning documentary filmmaker who also reported on the Allen allegations and concluded that Moses's recollections are correct -- Allen never abused his daughter, and Mia Farrow used her power over the children to convince them they'd been harmed. I asked Weide why he thinks Dylan's story has gotten so much traction while Moses's hasn't. "I imagine it muddies up the accepted narrative that’s making the rounds right now," he said. "I think the fact that it’s a male making the abuse claims about a woman that some people believe is some kind of humanitarian is a part of it, and I do believe the fact that Moses isn’t white also plays a role. But Moses’ story is not going to go away, and I can only stress again that what he’s revealed so far is only the tip of the iceberg." 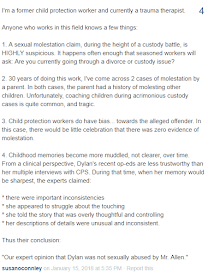