Song of the Day: 'Ticket to the Tropics' by Cristina 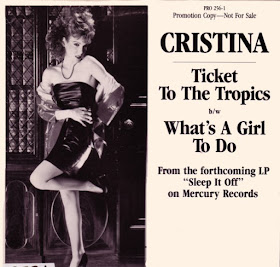 I blogged about the sexy post-punk singer back in 2011, but I couldn't find the video for this MTV favorite ... until now! Cristina, the daughter of a French psychoanalyst and an American illustrator-novelist-playwright, was described by one blogger as Lydia Lunch "if Lydia were a debutante," whose lyrics are "bitchy, aloof and hilarious." (Her second album opens with the pulsating "Don't Mutilate My Mink"!) Cristina was a Harvard drop-out who was writing for the Village Voice when she met and married a wealthy British retailing heir who had recently started ZE Records. The cynical "Disco Clone" was her (and the label's) first single, which led to two classic albums -- one produced by August Darnell (aka Kid Creole) and one ("Sleep It Off") by Don Was. After her second album bombed -- the LP was such a commercial failure, in fact, that the sleeve designer ended up reusing the concept for Grace Jones' "Slave to the Rhythm" -- she retired to domestic life in Texas before divorcing and returning to Manhattan. TimeOut New York reported in 2004 that she is battling a "debilitating illness," but I'm not sure what her status is today.

The long-lost video, above.

Although she was a gifted songwriter, her covers certainly didn't go unnoticed, like this deadpan version of "Drive My Car" by the Beatles ... 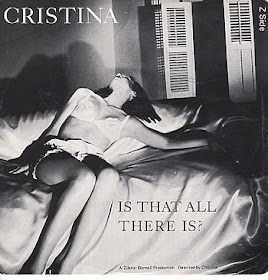 And her downtown take on this Peggy Lee classic -- with a rare-for-its-era same-sex twist and a romance that makes "He Hit Me (and It Felt Like a Kiss)" sound like a nursery rhyme -- is also worth a listen. In fact, songwriters Jerry Leiber and Mike Stoller were so furious when the original lyrics of their 1969 Grammy-winner were changed this way, they had an injunction against the recording that lasted for 24 years.

One reviewer wrote “If Jackie Kennedy had made a record, it would sound like this.”
Kenneth M. Walsh at 5:15 AM