A Fabio for the 21st Century?

UPDATE: This guy just got a lot less attractive. A friend just discovered that our hunk has an issue with publishers using his photo on books for gay men -- and will only do threeways if they're geared toward women. (How classy!) Anyone else thinking the lady doth protest too much? ... 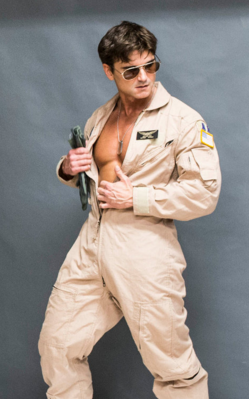 Found this story about romance-novel cover hunks to be especially entertaining since the publisher of my book was acquired by an outfit better known for this steamy fare! 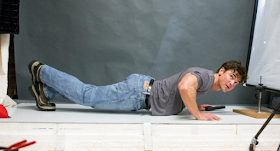 
Jason Aaron Baca is good-looking, not handsome like the Ryans (Gosling and Reynolds) or rugged like Daniel Craig, who is fetching in a tailored Tom Ford suit. But when Mr. Baca, 42, slipped on a pair of dark aviator glasses recently, he looked remarkably like Tom Cruise in “Top Gun.”

He was dressed for work in a khaki military jumpsuit. And even though it was barely noon, he had already stopped by the gym to make sure his biceps and legs looked combat-strong. His assignment: To be a military helicopter pilot saved in a crash by a female rescuer with whom he once had a torrid affair. Reunited, their passions have flared.

Mr. Baca is a cover model for romance novels. He has been on nearly 500 book covers, by his own account — one of scores of men like him vying to be heroic heartthrobs. Not since the flaxen-haired Fabio Lanzoni dominated drugstore book racks in the 1980s and 1990s, with his lion’s mane and bulging biceps, have cover models been in such demand.
Romance writers and publishers, as it happens, are among publishing’s most innovative participants. They were early to digital serialization. Book sellers, too, now crowdsource ideas to find fresh writers. And if you want to explore a virtual relationship, you can try a romance-novel app.

How hot are romance novels? Over all, annual sales totaled $1.08 billion in 2013, according to the Romance Writers of America, which tracks sales. And their popularity is expected to grow. Last year Scribd, an e-book subscription service, sharply reduced the number of romance and erotica novels it offered because it couldn’t afford to keep up with readers’ appetites. (Scribd pays publishers every time a book is read and loses money if a book is too popular.) 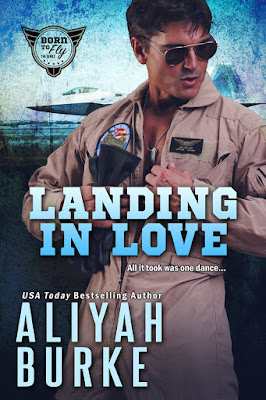