Melissa Harris-Perry Fired From MSNBC After Public Feud With Network 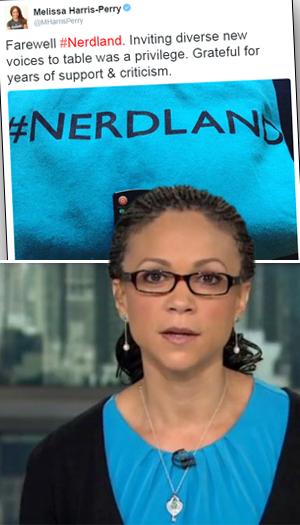 Although I found her softball questions to be frustrating and her lisp to be distracting, I'm still disheartened to see Melissa Harris-Perry exit MSNBC after a very public and ugly dispute. Only the principals involved know what really happened. But for the life of me I can't understand why someone so smart would wage a war with her bosses like this -- at one point saying "“I am not a token, mammy, or little brown bobble head" -- then have the audacity to say she DIDN'T think race played a role in her show's being pre-empted various times during election season . “I don’t know if there is a personal racial component,” she said. “I don’t think anyone is doing something mean to me because I’m a black person.” So you DON'T think race played a role, but you used the most racially charged language you could possibly think of? This just seems so reckless, especially for someone in her position as an authority on racism and diversity. I don't hear any of her colleagues coming to her defense, so something tells me this woman's ego has gotten the better of her. The network desperately needs different types of voices, but not in the form of someone who seems slightly unhinged. Perhaps it's time to give Joy-Ann Reid another shot, she's always struck me as a pro.

UPDATE: Plans for Alex Wagner to have another show have been scrapped.