I pride myself on not being easily "offended," but I sure find the phrasing of this question in Paul Waldman's Washington Post Q-and-A about Indiana's new discrimination law to be unnecessarily flippant. I get that it's written from a layman's point of view -- not an LGBT activist -- but doesn't EVERYONE agree that something like "Are there any other reasons this has garnered so much attention" or "attracted so much scrutiny" would be more sensitive than saying "such a big deal?" The very notion that there needs to be "other reasons" is galling, too. A religious-freedom law -- unprecedented in its awfulness -- was enacted to TARGET certain people and make it legal to humiliate and rob them of their civil rights based on who they are. That's why it's SUCH A BIG DEAL -- for crying out loud! Do we need "other reasons"? Really awful. And this is from the so-called liberal media??? 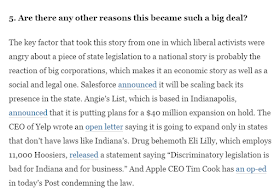