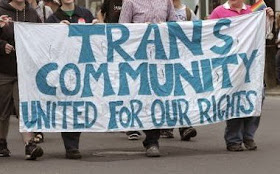 This is huge, because private insurance companies and Medicaid programs take their cues from what the U.S. government decides is medically necessary.


Medicare can no longer automatically deny coverage requests for sex reassignment surgeries, a federal board ruled Friday in a groundbreaking decision that recognizes the procedures are medically necessary for people who don't identify with their biological sex. Ruling in favor of a 74-year-old transgender Army veteran whose request to have Medicare pay for her genital reconstruction was denied two years ago, the agency's Departmental Appeals Board said there was no justification for a three-decade-old HHS rule excluding such surgeries from procedures covered by the national health program for the elderly and disabled. Jennifer Levi, a lawyer who directs the Transgender Rights Project of Gay & Lesbian Advocates and Defenders in Boston, said the ruling doesn't mean Medicare recipients are necessarily entitled to have sex-reassignment surgery paid for by the government. Instead, the lifting of the coverage ban means they now will be able to seek authorization by submitting documentation from a doctor and mental health professionals stating that surgery is recommended in their individual case, Ms. Levi said.