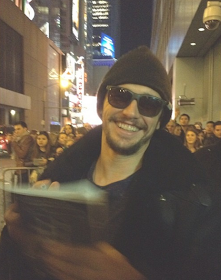 The Internet is buzzing with reports that James Franco tried to hook up with a 17-year-old girl he met after a performance of "Of Men and Men," even after he found out how old she was. (He later tweeted: I HOPE PARENTS KEEP THEIR TEENS AWAY FROM ME. Thank you.!) This titillating bit of news seemed like the perfect chance for me to share a little bit of gossip I've heard around the neighborhood. I'm told from a very reliable source that James has a "small penis," but "knows what he's doing with it" ... and that he is so ADHD that he will text while receiving head. (Lovely!) Perhaps more disappointing than either of these shortcomings though is this: He is apparently a BIG FAN of emojis, which he uses liberally in text messages, especially when looking to hook up. Those 35-year-old KIDS! 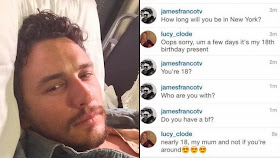