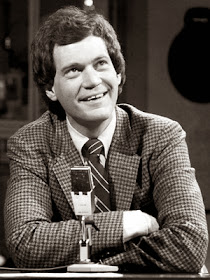 Dave will reportedly exit "The Late Show" in 2015 but, to be honest, I haven't watched Dave in ages, other than to see Darlene Love usher in Christmas or the occasional appearance by Rosanne Cash, etc., I heard about in advance. But my love for Dave goes way back. My mom, siblings and I were completely hooked on his short-lived debut, the daytime "David Letterman Show," which featured a zany cast of characters, including Edie McClurg's Mrs. Marv Mendenhall. It debuted in the summer of 1980 and we were spellbound by this gap-toothed Midwesterner who seemed to have our family's weird sense of humor. We never missed an episode, which were 90 minutes long when it debuted. (It was later trimmed to an hour.) We were crushed when it went off four months later -- we were at school, but we know it wouldn't be waiting for us come summer -- but when he got his late show on NBC, the love affair began all over again, in no small part thanks to Teri Garr and Sandra Bernhard. Will be interesting to see who the network thinks is right to replace him. Everything is different now, but some have mentioned Chelsea Handler as a possible replacement ... but I don't see that flying on network television.