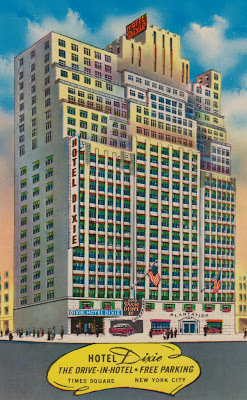 To New Yorkers with Times Square experience -- I worked for years in the New York Times building on West 43rd Street -- the Hotel Carter is best known as one of the dirtiest hotels in America, the place next to the club where Puff Daddy shot someone when he was Mr. J. Lo, or where Joel Steinberg hung out after finally getting released from prison for his role in the sad death of his adopted daughter, Lisa. (It also houses the Lucky Star deli!) But it turns out the Hotel Carter -- then known as the Hotel Dixie -- used to be known for something far less shady: It was home to the Central Union Bus Terminal, which at the time was the largest enclosed bus station in New York. Scouting New York has all the fun details HERE. 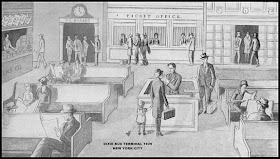