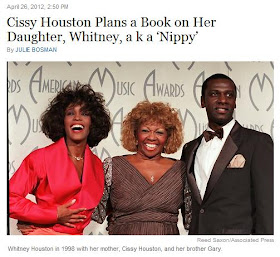 Media Decoder is reporting that Cissy Houston, the gospel singer and mother of Whitney Houston, has been meeting with publishers in New York this week to shop a book about her late daughter. (A ghostwriter will be used.) Although I'm a bit surprised -- I'd always thought of her as being intensely private -- I could see why she would want to tell her story. That said, the rumor is she doesn't seem too willing to discuss the nitty gritty, and I certainly won't be buying it unless she addresses this tidbit from a previous Whitney Houston biography:

Then Cissy Houston slugged Robyn Crawford in her right jaw with her fists and Robyn falls to the ground. Cissy Houston kept punching and kicking her, yelling: “I’ll kill you, you stupid b**ch!” Onlookers had to pull Cissy Houston off Robyn Crawford.
Spill it, gurl! While I have my doubts that Cissy would ever come clean about her daughter's sexuality, a friend in publishing tells me that Whitney's less loyal (more honest?) father was shopping around a tell-all right before he died, in which he claimed Whitney's life was ruined by her having to live in the closet, a sentiment echoed by others in the know.
Kenneth M. Walsh at 3:43 PM