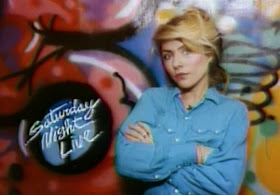 One of the many fun things I did over the holiday break was come across the rare episode of "Saturday Night Live" Debbie Harry hosted on Valentine's Day 1981, during the season's tumultuous sixth season when the entire original cast, the writers and Lorne Michaels jumped ship and associate producer Jean Doumanian was assigned the task of recreating the hit show from scratch. Harry, at the peak of her success with "Call Me" and "The Tide Is High" having recently topped the charts and "Rapture" on its way to No. 1 the weekend she was hosting, was one of the show's first hosts/musical guests -- her acting skills having been recently put on display in the indie film noir "Union City." After an extraordinarily brief and rather goofy opening monologue -- where she introduces us to her "parents" and gets Cupid (played by newly added cast member Eddie Murphy) to shoot his arrow at a heckler calling her "Blondie," Deb holds her own in a handful of poorly written sketches, ranging from playing a lesbian living with her lover in Soho who gets a surprise visit from her clueless aunt and uncle, a sexy blonde who brings out the animal in her date, a beauty school student (opposite Gail Matthius' legendary --to my friend Mark and me, anyway -- Valley girl Vicki) and a "Girl From Joisey" (opposite Joe Piscopo's Guy From Joisey).

What's most memorable about the episode, however, is Debbie's music performances. 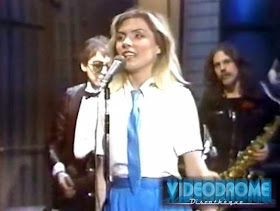 Always one to go against the grain -- in acts that have frequently left her fans shaking their heads -- Debbie eschews all of her hits, opting instead for out-of-left-field covers of Teddy Pendergrass' "Love TKO" and Devo's "Come Back, Jonee." 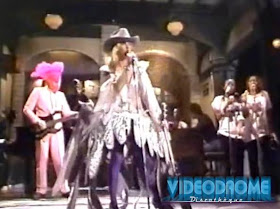 While it must have frustrated fans and producers alike, not to mention her handlers -- how do you NOT do your song that's rapidly rising on the charts when you're hosting "Saturday Night Live??? -- what a treat it is some 30 years later to see a luminous Harry command the stage, in a way that I do not recall ever seeing her do so before or ever since. Her voice has never sounded more confident than it does on "Love TKO" -- perhaps foreshadowing her collaboration with Chic on "Koo Koo" later that year? -- and later she (now dressed as a couture cowgirl) and a Klaus Nomish Chris Stein look like they might have mated moments after performing the spasmodic "Come Back, Jonee," and Lady Gaga popped out nine months later.

Abridged versions of the episode are available on Hulu and Netflix -- always missing the songs and rather inexplicably some of the skits -- but Videodrome Discotheque has all of what you're missing right here. Enjoy! 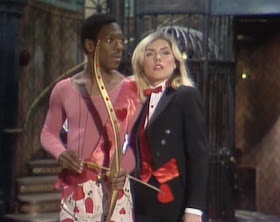 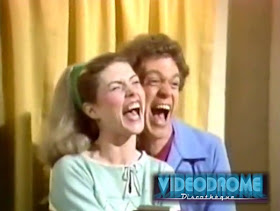 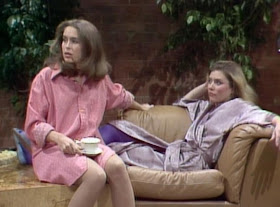 As Susan the Soho lesbian with lover Liz 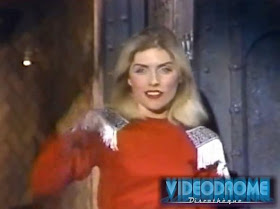 Introducing special musical guests Funky Four Plus One More, the first rap group to ever appear on "SNL." Harry was a fan and brought them on, with some members accompanying her on "Love TKO" 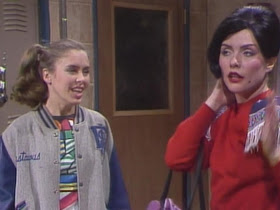 As the cool girl Tina with Vicki the Valley girl 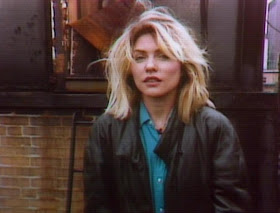 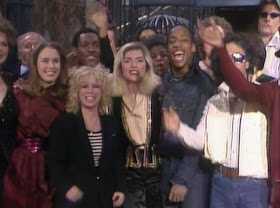 Signing off. That's Denny Dillon on Deb's right, who I think was grossly underrated (remember "What's It All About, Leo?"!!!). When Jean Doumanian got axed later that season, Dick Ebersol took over and fired the entire cast, save Murphy and Piscopo. The 4' 11" actress Dillon later found success as Toby Pedalbee, the abusive yet loyal assistant on HBO's "Dream On." 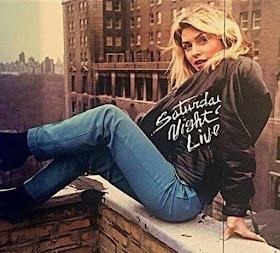