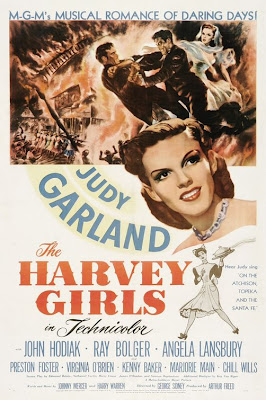 No Tired Old Queen would be complete without an affection for Judy Garland, and this week Steve Hayes does not disappoint:

Judy Garland is a waitress on a mission in George Sidney's riotous "The Harvey Girls" (1945). Co-starring John Hodiak, Angela Lansbury, Cyd Charisse, Ray Bolger, Virginia O'Brien and everybody's favorite bold-as-brass chaperon, Marjorie Main, the Harvey Girls set out to bring civilized dining to the old west and tame a few cowpokes in the process. With music and lyrics by Johnny Mercer and Harry Warren, it has all the color, singing, dancing and spectacle that made MGM the number one studio for movie musicals during the Golden Age of Hollywood. It also features the Academy Award winning song "The Atchison, Topeka and the Santa Fe," which I defy anyone to keep from humming for days once they've heard it. Judy, fresh from her triumph in "Meet Me in St. Louis" is funny, warm and adorable as a gal with enough gumption to single-handedly tame a town. Angela Lansbury is her match as the bad saloon girl with the heart of gold. So, "park yer carcass," settle back and let MGM and Judy Garland show you how it's done in "The Harvey Girls."