Sad to read about the passing of Dennis Hopper, Gary Coleman and Jeanne Austin, the matriarch of the tennis family that produced two-time U.S. Open champ Tracy. 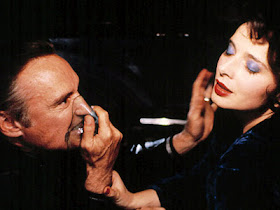 I've never seen most of Hopper's most famous roles -- time to put "Easy Rider" in my Netflix queue? -- but he will live on forever thanks to his role in "Blue Velvet," which was the first film I saw in the Memorial Union at Arizona State on Dollar Movie Night. Incredible stuff. 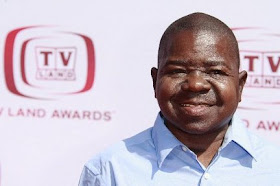 What can you say about Gary Coleman? All I can add is that when I heard he was gravely ill earlier this week, I said to Michael that for the tormented actor's sake, I hoped he would pass peacefully. I don't think I've ever seen a more miserable and tormented person than Coleman -- I don't think you ever get over being exploited by your own parents, as you forever lack that reserve of love and support people need to cope with life's ups and downs, which we now know are particularly hard on child stars. It's truly a shame that he never found peace while alive. 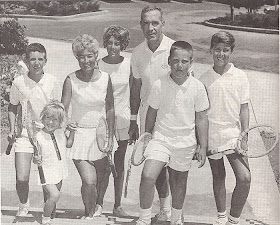 What I remember about Jeanne Austin (seen here at the Jack Kramer Club in 1966 with Jeff, Tracy, Pam, husband George, John and Doug) is that I know almost nothing about her (it took her passing for me to learn that she grew up in Beverly Hills and attended UCLA -- who knew?). In an era of awful "tennis parents" -- I'm looking at you, Roland Jaeger -- a phenomenon that has only grown worse (Damir Dokic), Jeanne Austin followed in the footsteps of Chris Evert's mom, Colette, and let her daughter's game do the talking. The only real memory I have of Mrs. Austin is the story Tracy told about what she and her mom did to celebrate her defeating Chrissie in 1979 to become the youngest winner of the U.S. Open in history: they went to McDonald's! My condolences to the entire Austin brood.
Kenneth M. Walsh at 6:20 PM