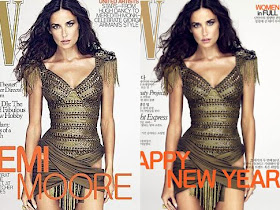 Hips don't lie, or do they?
The news that Demi Moore denies that her cover photo was retouched by W magazine is old -- and laughable. (ALL magazine covers are retouched -- a lot. See: "Issue, The September" and that "hag" Sienna Miller, who is half Demi's age.)

But now that the photographer who insists Demi's left hip had been "clumsily removed" from the U.S. cover is claiming vindication because the Korea edition "fixed the hip that Demi, her lawyers, and W insisted wasn't edited," Really? Maybe I let my subscription to Highlights run out too soon, but (other than the darkness of her dress) is there anything different about these two photos? (It doesn't help my confusion that some accounts of the "controversy" say it was Moore's right hip in question.)

And then there's this: 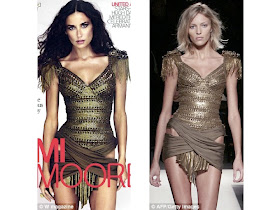