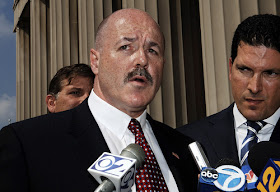 A federal judge has ruled that the Sept. 11 terror attacks CANNOT be brought up by the defense team of Bernard Kerik at his corruption trial,

"This is not about 9/11," Judge Stephen Robinson said at a pretrial conference. He said the attack was irrelevant to allegations that former police commissioner accepted apartment renovations from a construction company in exchange for recommending the company for city contracts. (Are there fan clubs for judges? LOVE him!)

Now if only this judge could do something about W., Cheney, Giuliani (insert GOP candidate here) ...
Kenneth M. Walsh at 4:41 PM