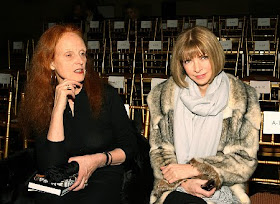 Went to see "The September Issue" with my guy and a group of friends on Saturday night in Chelsea. The theater was packed with fun queens, so I knew we were in for a good time no matter how the film actually was. Lucky for us, director R.J. Cutler did a nice job documenting the behind-the-scenes machinations of the production of Vogue's famed 2007 September issue, when advertising reached an all-time high (the book was 840 pages vs. this year's meager 584). While many of the people who work in the industry take themselves entirely too seriously, Cutler presents the subject matter in an unpretentious manner, never missing a chance to show how ridiculous these people can be and wisely focusing on the dynamic between editor in chief Anna Wintour and creative director Grace Coddington. The details are best experienced firsthand, but Coddington -- herself a former model -- is an genuine delight, and the complete antithesis of everything you'd expect a fashion editor to be. Her thoughtful yang to Wintour's icy ying makes the film. So much so, in fact, I was stunned when I later learned Grace apparently wanting nothing to do with the production when it began. You'd never guess this seeing how natural and comfortable she is sharing her feelings before the camera, the voice of reason in a newsroom full of completely unnecessary drama. My grade: A minus
Kenneth M. Walsh at 7:00 AM