Minds for Business, Bodies for Sin 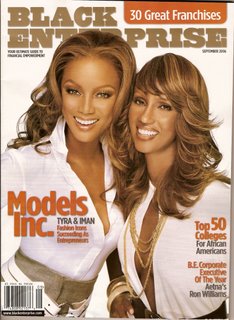 No, I'm not promoting the new issue of Weaves Illustrated. 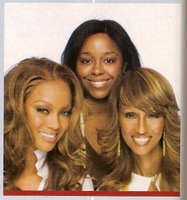 Last night after work I stopped by a party at PS 450 to celebrate my good friend Alisa Gumbs' cover story on black models who have gone on to become successful businesswomen -- modelpreneurs -- coming out in the September issue of Black Enterprise magazine.

Alisa flew to Hollywood to interview a slew of big stars for the story, including Tyra Banks (down to earth), Iman (aloof, but eventually came around) and Kimora Lee Simmons (is she getting a divorce or not? who knows!). When Iman showed up for the photo shoot with her "hair" already -- uh -- on, Tyra went and picked out a matching 'do.

I met and hired Alisa nearly seven years ago when I worked for a news service of sorts in Midtown. Even though she had an impeccable educational background and excellent work experience, I knew I was going to hire her the second I saw that smile of hers. Anyone else notice that Alisa -- flanked by two supermodels who would barely cede an inch of lens space in the photo on the right -- is prettier than either of them and is the only one in the photo with her own hair?

It's an interesting and well-written piece. Congrats, Alisa!
Kenneth M. Walsh at 8:57 AM