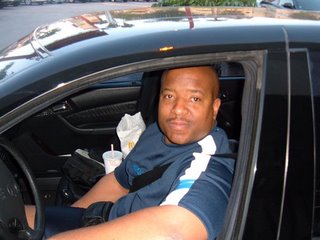 The autographed headshot of Ruth Buzzie may no longer adorn the wall at my favorite El Pollo Loco on Sunset Boulevard, but that doesn't mean the streets of the City of Angels aren't still littered with discarded stars and worn-out cars ...

As we pulled into the parking lot across from Crunch gym, Michael spotted Young MC driving out in a new black Mercedes. Like the complete geek that I am, I busted a move over to his car and accosted him for a photo-op -- only to realize that the "Celebrity Fit Club" winner was shoveling McDonald's food into his mouth. (He was understandably not happy when I asked if I could take a picture but begrudgingly agreed.) 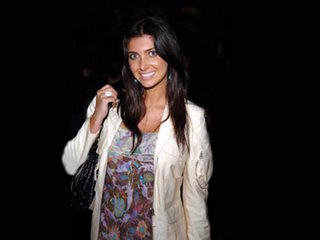 The night we had dinner at my favorite Tex-Mex place in West Hollywood, Marix, Michael spotted a familiar face at one of the tables near where we were having a drink waiting for ours. It turned out to be Brittny Gastineau of "Gastineau Girls" fame, along with her boyfriend, Richard Voll, and another guy. Fortunately we figured out that she wasn't actually Adrianne Curry before saying anything to her.
Kenneth M. Walsh at 8:57 AM