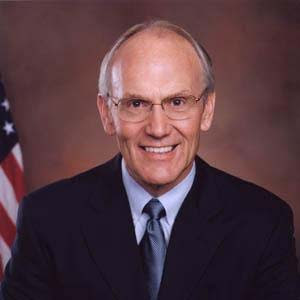 Maybe Fort Lauderdale's Democratic mayor, Jim Naugle, should reach out across the aisle and speak to Republicans about using public restrooms for sexual encounters. This time around it's homophobic married Senator Larry Craig of Idaho, who was looking for a little porcelain action at a Minneapolis airport in June yet somehow kept his arrest under wraps until yesterday when he pleaded guilty to misdemeanor disorderly conduct in relation to the incident. (What exactly does that mean -- did he get too excited during the game of footsy under the stall separator?) Despite pleading guilty, the senator has gone on the offense insisting -- like Florida state Sen. Bob Allen -- that it was all a big misunderstanding (cocksucking usually is).
Mike Rogers of BlogActive has been up Craig's hypocritical ass for years (but then again, who hasn't?) and had this to say about the affair (how the senator should run a re-election campaign as a "proud gay American" after looking for some glory-hole action in beyond me, but it's Mike's blog):
"Larry Craig should stand up and be honest with the citizens of Idaho about who he is. Tonight is a historic opportunity for Senator Craig to run for re-election as a proud gay American. What a great turning point for one of the most conservative states in the country to be represented by an openly gay Senator."
"Senator Craig's situation is exacerbated by the fact that he has a voting record that is counter to the interest of lesbian and gay Americans. All too often, closeted men like Senator Craig use their voting record to hide their truth from the American people. With this news now out in the open, I call upon Senator Craig to reevaluate his votes on issues like the Federal Marriage Amendment, Don't Ask Don't Tell, and the Defense of Marriage Act.
"The Minnesota arrest is not a one-time occurrence," Rogers added. "Last October, I reported on three other encounters that Senator Craig had with men – including one in a bathroom in Washington's Union Station. What's troubling about this is Larry Craig's hypocrisy: he repeatedly votes against the gay community during his day job, while engaging in same-sex encounters as extra curricular activity. Now is a good time for Larry Craig to join millions of other Americans and be proud of who he is. (Read the full statement here.)
Kenneth M. Walsh at 12:25 AM